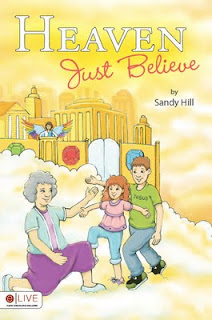 Yippee, the cover is done and ready to share with you. Jason Hutton, illustrator for Tate Publishing, created three different covers but this is the winner and I couldn’t be happier.
Posted by Sandy Hill at 9:48 AM 5 comments:

Heaven, Just Believe is in the final stage before it goes to the book production stage. While I wait to hear from Tate Publishing I decided to take a little break and have some fun.
My husband, Gene, and I decided to join the 3rd annual Kingston Slug-Hunt. You may ask yourself what is a Slug-Hunt? Ceramic slugs decorated by local artists and students are hidden around town for children and adults to find. If you don’t find one, no problem, you can join the silent auction and bid on your favorite but be aware you are bidding against call-in bids from other states. Yes, the Slug Hunt is that famous!
It was a beautiful sunny day and off we went on our adventure. I found one in front of Main Street Ale House restaurant. Artist Lori Barrett created Love the Grape slug. We stopped by Main Street Ale House for a delicious lunch and a photo opportunity. We love this slug and have added a candle and put it in our entryway to greet our guests. 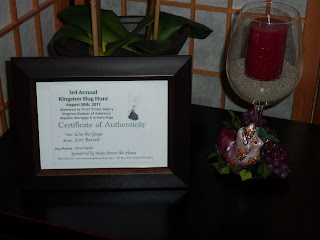 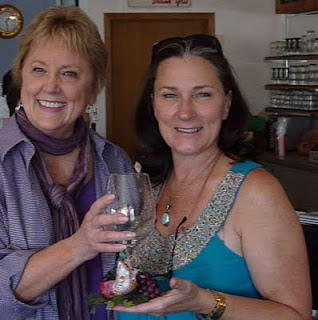 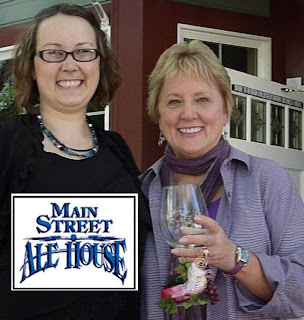 Another one I found was La Di Da by artist Jessica McGreal.  Anchor Chiropractic sponsored this slug. Its place of honor will be our guest room. 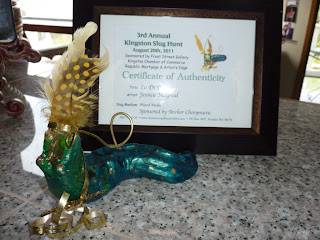 The last slug I found we are calling the mystery slug because we are to receive it later. We can hardly wait to welcome our new slug to our home. Yes, these slugs are prized possessions especially in Kingston, Washington.
I must say I loved and enjoyed the slug Gene found. It was a chocolate one which of course we have no photo of,  because we were too eager to taste and enjoy.
It was a fun day when 250 slugs invaded Kingston. Profits from this annual event benefit the Front Street Gallery Art Scholarship Fund and the Kingston Chamber of Commerce. Our thanks to Front Street Gallery, Kingston Chamber of Commerce, Yacht Club, sponsors, and all the many volunteers. We had a great day and can’t wait until next year when the slugs once again invade Kingston.
Posted by Sandy Hill at 10:32 AM No comments:

For my friends who are writers and would be writers, I wanted to share a great opportunity available to you.  Elaine Wright Colvin, Writer’s Information Network founder and director, shared the following email:
Author with Seven Million Books Sold Presents at Online Conference for Christian Writers

MEDIA ADVISORY, August 9, 2011 /Christian Newswire/ -- Athanatos Christian Ministries is an apologetics ministry with a mission: defend the faith in the culture by cultivating Christian authors, artists, and musicians. On top of their annual Christian writing contests, they have now added a free online writing conference. The conference will be held on August 18th, 2011. The conference website is www.christianwritingconference.com.
ACM is not new to virtual conferencing. It has hosted two online apologetics conferences in the last two years. This spring, Dr. Gene Edward Veith was the keynote. The 'keynote' to ACM's writing conference is also connected to Dr. Veith. John Erickson, author of the 'Hank the Cowdog' series, which has sold 7.5 million copies, has more recently penned a book speaking specifically to Christian writers and Dr. Veith writes the introduction. (Nancy Pearcey writes the foreword.)

Since the conference is free and takes place online, Christian writers from across the globe can participate.

Other presenters include the conference's host, ACM's Executive Director, Anthony Horvath. Author Dr. Holly Ordway will present on the 'art of wordsmithing.' The winners of ACM's first annual Christian novel contest will also be presenting: Shirley Tucker, author of the upcoming release "Diamonds in the Dust" and Robert Abernathy, whose title "The Walk to Walden Hill" is officially available September 1st. Other presenters include published short story author Pastor Jamie Greening and screenwriter Robert Kramer.

ACM has been actively reaching out to Christian authors and spurring them on to excellence for three years. Its second annual Christian novel contest is taking submissions through September 1st. $2,500 awaits the winners, plus possibly an offer to publish. ACM's fourth annual Christian short story and poetry contests begin taking submissions on September 2nd. A scholarship is available for eligible high school entrants and the winner of the adult category is invited to present at one of ACM's conferences. Last year's winner of the 19 and up category, Robert Cely, is presenting at ACM's August 18th conference.

Thanks Elaine for the great information.
Posted by Sandy Hill at 11:55 AM No comments:

For Students and Writers

On a recent trip to the store I realized school is just around the corner when I saw all the school supplies on sale. For the classroom or workplace I have a book recommendation. What’s the Rule? A Simple Guide to Perfect Punctuation, Great Grammar, and Superb Sentences and Style by Kathy Sole is a user-friendly reference guide. As Kathy states, “Writing rules for the real world.” I was blessed to receive this book as a gift. Thanks P.J. and Kathy. I hope you will check it out and make your life easier.
Posted by Sandy Hill at 7:37 PM 1 comment: